Indulleida focuses on the external market to keep on growing

The Indulleida Zufrisa Group bets on foreign markets to keep on growing and it is increasing its international contacts during this week at the SIAL trade fair in Paris. Therefore, the trend is to open overseas to increase sales and, at the same time, strengthen the Group export destinations which is already selling its products around 60 countries. Thailand, Brazil, Mexico, Cuba, United States, Bolivia, Australia, New Zealand, India, Japan, Korea, Taiwan, United Arab Emirates, Saudi Arabia, Iran, Ukraine, Russia, Turkey, Algeria and Tunisia are some of the Indulleida current markets that in the last financial year 2014-2015 increased its sales by 10%, with a 62 million euros turnover and transforming 270,000 tons of fruits and vegetables. These data place the company as one of the European leaders in the fruit processing sector, as well as in the field of food innovation. 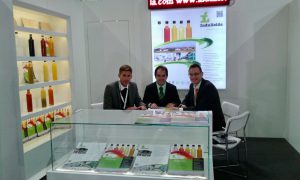 In this sense, Indulleida is present these days in SIAL, the world’s largest food innovation trade fair which is held in Paris. The aim is to internationalize the business and establish the company in the field of food innovation in a fair that has become the global showcase for food industry and brings together large producers and professional buyers around the world biggest bets and reveals trends and innovations that shape the future of the food industry.

Indulleida has in food innovation one of its key points as a company policy. For example, the production of natural ingredients of fruits and vegetables as a substitute for synthetic ingredients in foodstuffs is one of the identity signals of Indulleida. That is the reason why it leads consortium projects, supported by the CDTI, together with companies in the food industry and public research centers. In addition, Indulleida is currently involved in two European R & D projects as a consortium leader and in three R & D & i national projects related to obtaining molecular compounds present in fruits and vegetables that are of interest as functional food ingredients, nutraceuticals complex, natural dyes and cosmetics bases.

This site uses Akismet to reduce spam. Learn how your comment data is processed.